Newcastle moved out of the Premier League relegation zone with a vital 3-1 win against Everton that plunged Frank Lampard’s side deeper into trouble on Tuesday.

Eddie Howe’s team fell behind to Jamaal Lascelles’ own goal in the first half at St James’ Park.

But, on a pulsating Tyneside evening, the Magpies had the perfect response as Mason Holgate’s own goal sparked a rousing revival.

Mired in the bottom three for most of the season, Newcastle finally have their heads above water as they battle to avoid sinking into the Championship.

Unbeaten in four league games, Newcastle are one place and two points above the relegation zone.

Everton are now in serious danger and new boss Frank Lampard will have been left in no doubts about the size of the task facing him.

Lampard’s first game in charge was a 4-1 win over Brentford in the FA Cup fourth round on Saturday.

But the honeymoon ended much quicker than the former Chelsea boss would have liked.

Everton have failed to win their last six league games and sit uncomfortably just one point above Newcastle.

The promise of a star-studded spending spree fuelled by Newcastle’s Saudi-led owners failed to materialise during the January window.

But Newcastle remain ambitious despite their perilous position and Brazil midfielder Bruno Guimaraes marked his £33 million ($44 million) move from Lyon last month by claiming the club would be Champions League winners in the future.

For now, Howe would settle for avoiding having to win the Championship next season and this was a step in the right direction.

Guimaraes and former Brighton defender Dan Burn, another transfer window signing, were both on the bench, but Matt Targett, a loan arrival from Aston Villa, made his debut at left-back.

Having watched Everton score four for the first time in 42 matches at the weekend, Lampard started with his new signings — Dele Alli and Donny van de Beek — among the substitutes.

However, an injury to Demarai Gray forced Lampard to give former Tottenham midfielder Alli his debut in the 25th minute.

Alli had also been linked with Newcastle before joining Everton, so there was an inevitability about the jeers from the home fans that greeted his introduction.

Everton felt Jonjo Shelvey should have been sent off for crunching into Anthony Gordon, but they refocused to snatch the lead in the 36th minute.

Gordon’s free-kick was half cleared to Holgate and the defender saw his shot hacked off the line by Fabian Schar, only for Lascelles to accidently deflect it into his own net.

Newcastle drew level thanks to another own goal just 60 seconds later.

Remarkably, it was the same two players involved as Lascelles’ header from Kieran Trippier’s cross hit the bar and bounced in off Holgate’s thigh.

Newcastle were scenting blood and, in a microcosm of the collapse of his career, Alli made a crucial mistake as Newcastle took the lead in the 56th minute.

But Everton had lost their way in a lacklustre manner that will have alarmed Lampard and Trippier delivered the knockout blow in the 80th minute.

Netting for the first time since his move back to the Premier League from Atletico Madrid, England right-back Trippier curled his free-kick past Jordan Pickford to spark wild celebrations. 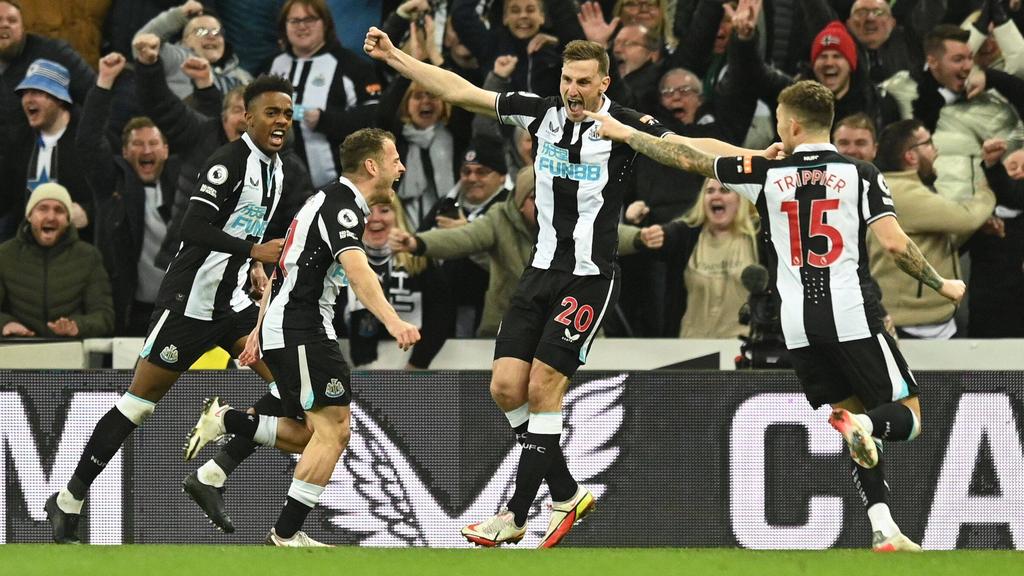